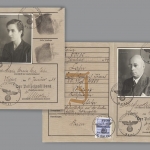 A large “J” in red gothic lettering is marked on these identification papers, and the first names “Israel” and “Sara” have been added to the names of Karl and Marie Cahn. These elements on the Cahns’ documents identify them as Jews and demonstrate the discriminatory laws put in place by the Nazis in 1938.

The Cahn persecuted in Nazi Germany 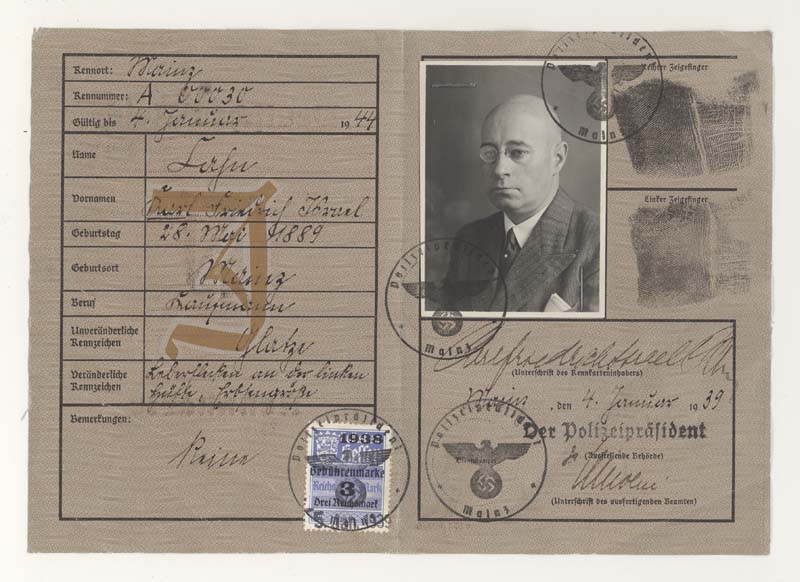 Karl Cahn's identification papers marked with a red "J" identifying him as a Jew. The first name "Israel" was added as a result of a law put in place by the Nazi regime in 1938. 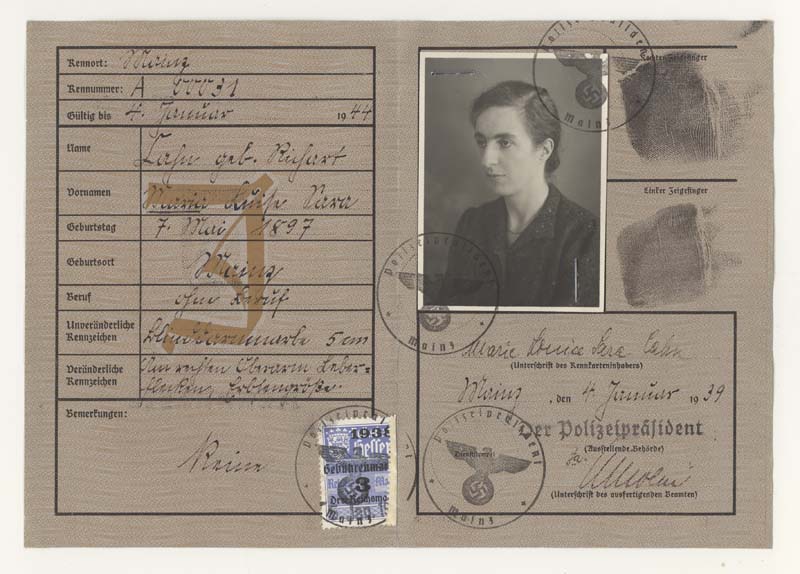 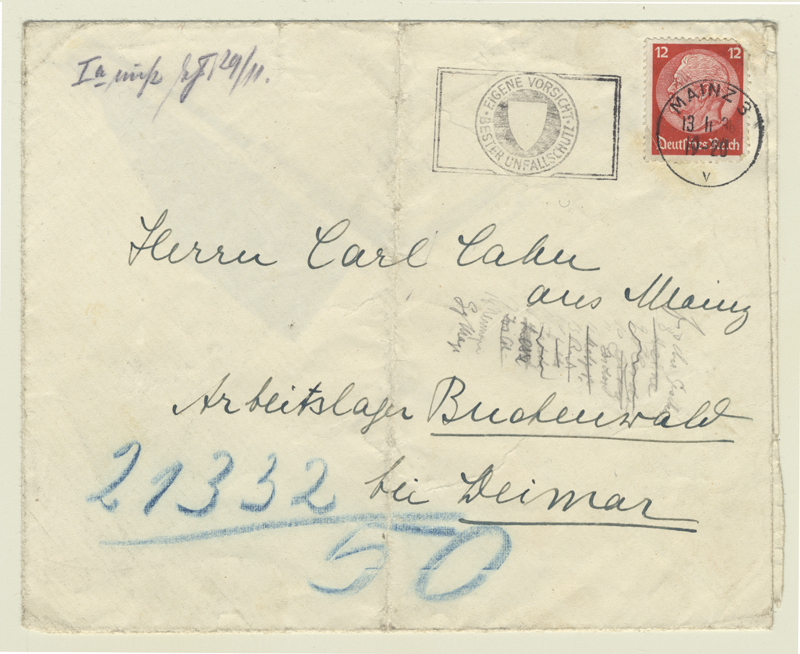 The envelope of a letter Karl received at the Buchenwald concentration camp. It probably contained the letter in which Marie shared that the Canadian government would allow them to enter the country. 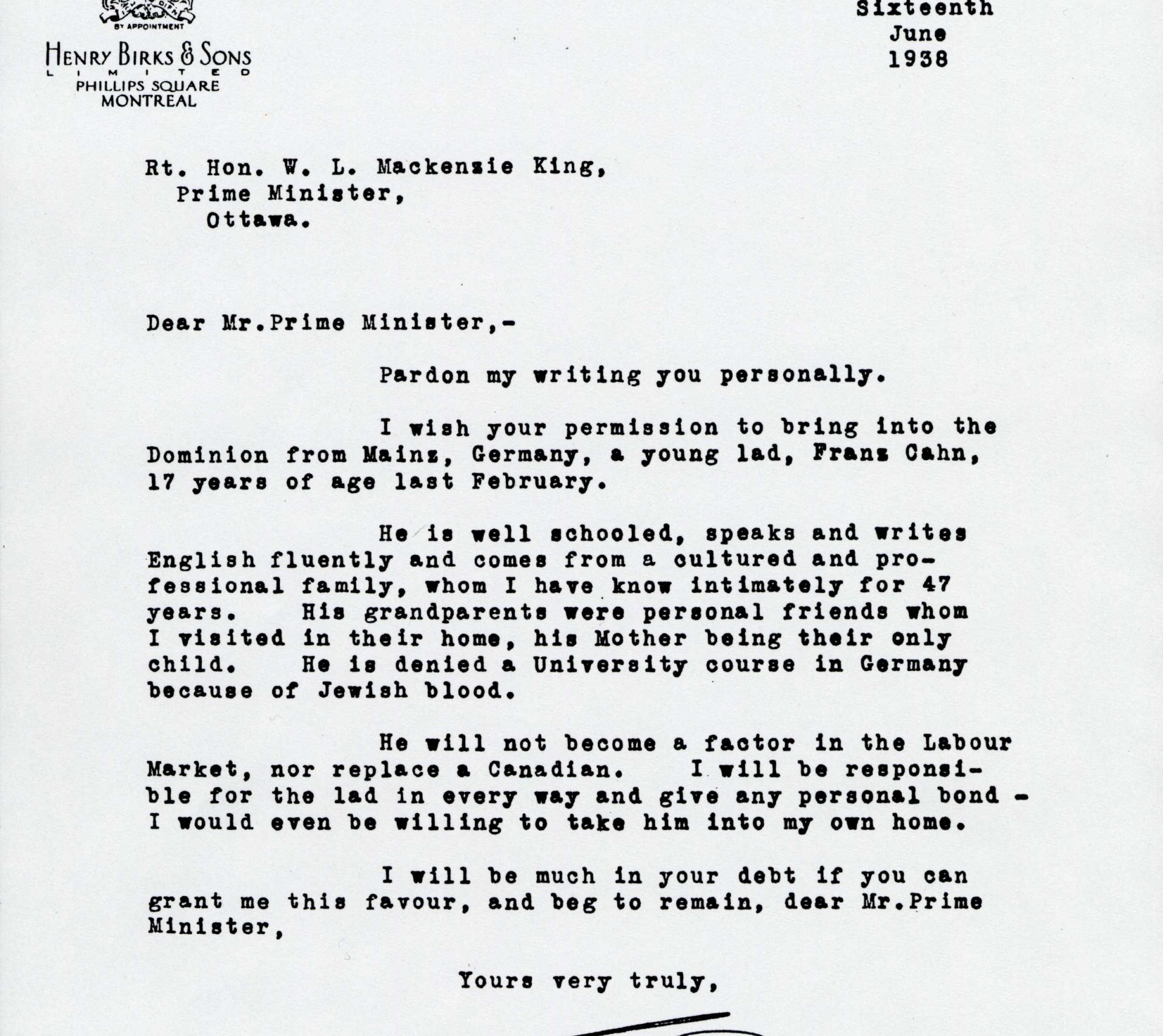 A copy of the letter that jeweller and businessman William Birks addressed to Prime Minister William Lyon Mackenzie King.

The Nuremberg and Kristallnacht Laws

After the Nazis came to power in 1933, many measures aimed at persecuting Jews were gradually established. In 1938, the identification papers of Jews were declared invalid if they were not stamped with a red “J” that identified the owner as a Jewish person. In addition, people who did not have a first name “of Jewish origin” were obliged to add the first names “Israel” for men and “Sara” for women.

Kristallnacht, or the Night of Broken Glass, was a vast and violent operation that took place from November 9 to 10, 1938 throughout the Third Reich (Germany, Austria, and the Sudetenland – in what is now the Czech Republic). During these pogroms, many Jewish shops, places of worship, and businesses were burned and ransacked. An estimated 30,000 Jewish men were arrested and imprisoned on these dates alone. Among them was Karl Cahn, who was imprisoned in the Buchenwald concentration camp.

A Visa to Freedom

The Cahn family had known William Birks, a Montreal businessman, for many years. He regularly bought silver and jewellery from them. Following Karl’s arrest in November 1938, Birks received an urgent message asking him to help get the entire family out of Germany. Birks appealed directly to Prime Minister William Lyon MacKenzie King to obtain visas for them. When the family succeeded in obtaining them, Karl was released from the Buchenwald concentration camp. The Cahn family arrived in Halifax in March 1939. They were among approximately 4,000 Jews allowed to immigrate to Canada between 1933 and 1939.

Raising Awareness for Prevention: The Involvement of Judy Kawalek Freedman

Judy Kawalek Freedman, a volunteer guide at the Museum since 2020, participated in the “Objects of Memory” project by telling us about the Cahns’ identity papers in this video. 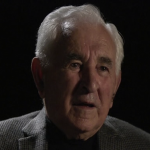