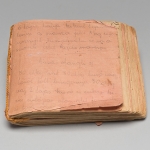 This book of recipes is made out of beige and pink pieces of paper retrieved from the factory where Edith Gluck worked. The booklet is bound together by an orange thread, also found in the factory. Edith hid this booklet, which contains about 200 recipes written in pencil, which she collected, while imprisoned in the Lippstadt camp in Germany.

Edith Gluck was part of a convoy of 530 Hungarian Jewish women deported from Auschwitz to Lippstadt in July 1944. She was forced to work 12-hour days in a munitions factory while only receiving a small ration of food. Back in her barrack, Edith wrote down recipes that she remembered preparing before the war. She also asked other inmates to contribute their favourite recipes.

Edith hid this booklet under the ground. Because it was written in Hungarian, German guards would believe it was a diary and beat her if they discovered it. Creating the booklet was a powerful act of resistance and an effort to retain their humanity, by this group of women who wanted to preserve their cultural heritage.

To me it represents the courage that my mother had and it was very important for her to keep her heritage alive.
Shirley Rosenfeld, Edith Gluck’s daughter

Edith Gluck donated her recipe booklet to the Montreal Holocaust Museum in 2010.

Recognize someone in a photo?