An example of spiritual resistance 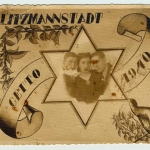 This 1940 postcard was created for Rosh Hashanah, the Jewish New Year. In the left corner is written “Litzmannstadt,” the German name of the Lodz ghetto in Poland. A dove and an olive branch can be seen in the lower right corner as well as a vine in the upper left corner. In the centre, inside a Star of David, is the portrait of Mordechai Feigenbaum, his wife Minka, and his brother Avrum.

Celebrating Jewish holidays in the ghettos

The postcard measures 4x6 inches. A vine and a dove are visible on an olive branch, both symbols of peace. Avrum Feigenbaum, his brother Mordechai, and his wife Minka took great risks to pose for this photo. 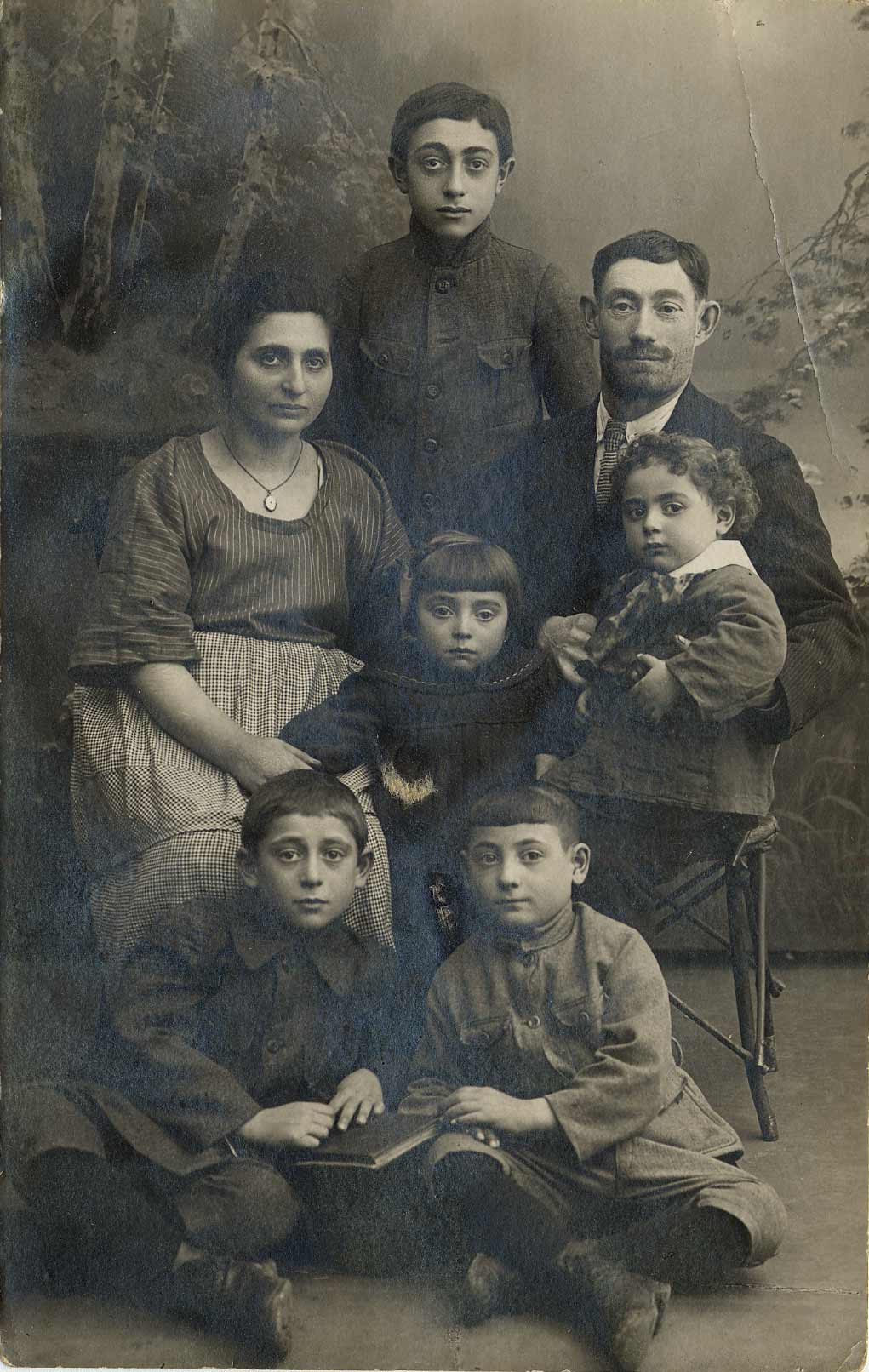 A portrait of the Feigenbaum family, Lodz, 1921. Avrum, as a child, sitting on the lap of his father Icak. He is surrounded by his mother Cyna, his sister Mindl, and his brother Eli standing in the back. His brothers Hersh and Mordechai sit in the front. Of the whole family, only Avrum and Hersh survived the Holocaust. 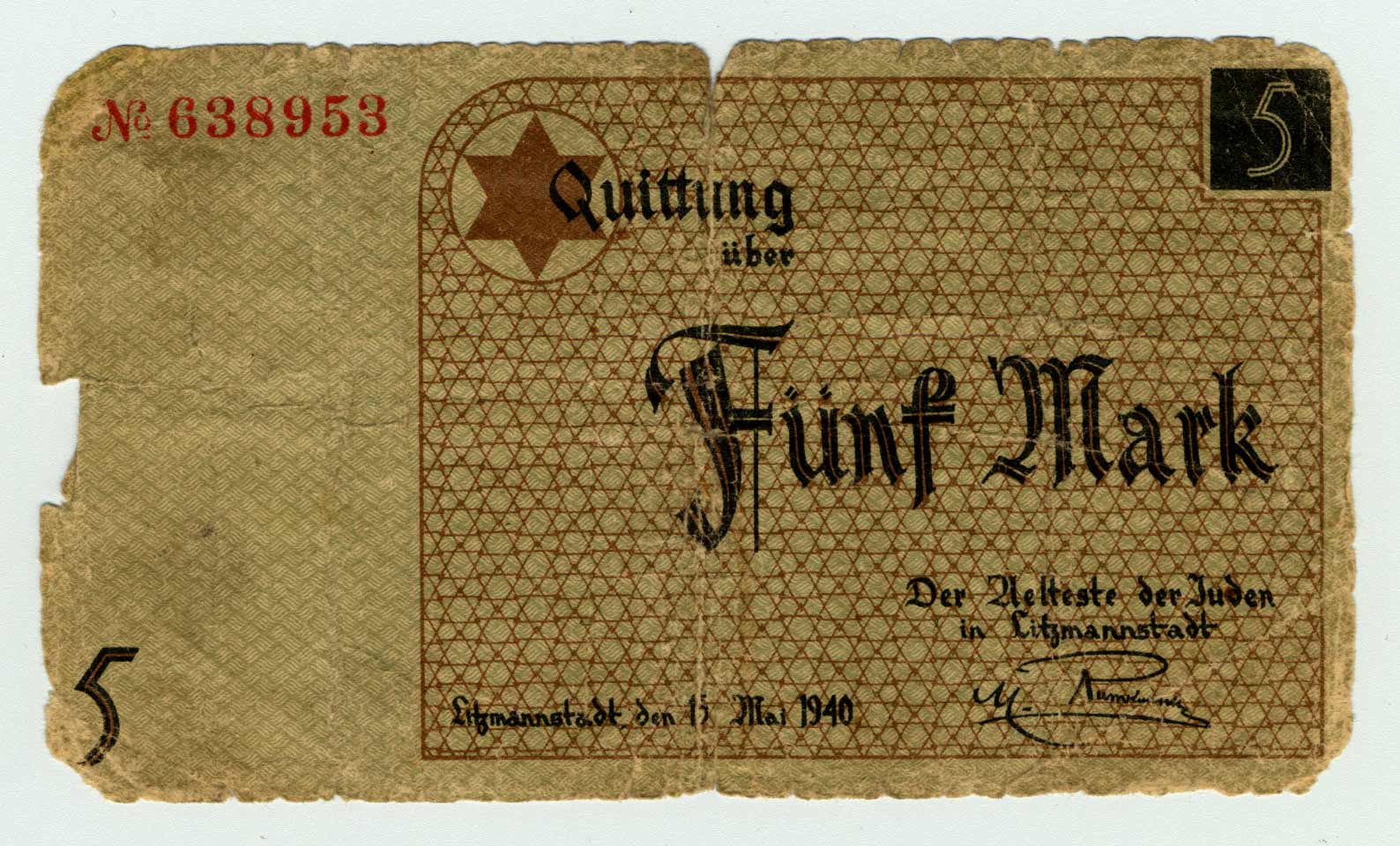 This paper money from the Lodz ghetto belonged to Avrum Feigenbaum. Ghettos were neighbourhoods in which Jews were confined in deplorable living conditions. The inhabitants of the ghetto were forced to use this currency to prevent them from interacting with the outside world.

Celebrated on the first day of the Hebrew month of Tishrei, corresponding to the September or October, Rosh Hashanah marks the beginning of the new calendar year in the Jewish tradition. It is a period of introspection and repentance.

This postcard is an example of spiritual resistance in many ways. First, the Feigenbaums were photographed, a prohibited act that could have led to their execution as well as that of the photographer. Second, this card defied the ban on celebrating significant moments of Jewish cultural and religious life.

Life in the ghettos

After the Nazi invasion of Poland in September 1939, Jews were forced to live in ghettos. Established within towns and cities of Poland, the ghettos were unsanitary and overcrowded neighbourhoods where famine and disease were rampant. In some ghettos, such as Lodz (or Lidzmannstadt in German), Jews were exploited as forced labourers by the Nazi regime. Despite the many hardships, acts of resistance, armed or not, demonstrate the resilience of the Jewish community.

In August 1944 as the ghetto was liquidated, Minka, her husband Mordechai, Avrum, and their brother Hersh were deported to the Auschwitz concentration camp, where Minka likely died. Shortly after their arrival, Avrum and his brothers were selected for forced labour. They were deported to Görlitz, a sub-camp of Gross-Rosen where they built vehicles for the German army. They were forced on a death march in February 1945 to the Gross-Rosen camp. Liberated in May 1945, Hersh and Avrum were the only members of their family to survive. Avrum immigrated to Canada in 1950 and settled in Montreal with his wife Tola. He began his involvement with the Holocaust Museum in the 1980s.

Cara Merson, a volunteer guide since 2020, participated in the “Objects of Memory” project. She tells us the story of the Feigenbaums’ Rosh Hashanah card in this video.

“ [..] We retained our humanity and today we remind the world that tomorrow it can happen again.”
Avrum Feigenbaum