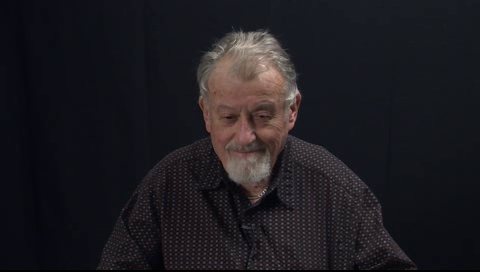 Fishel Goldig was born in 1933 in Mielnica (Ukraine), where his father had a grain export business. At the beginning of 1942, Fishel and his family were forced into the ghetto in the nearby town of Borszczow (Ukraine).

Rumour spread that the Nazis were planning on rounding up, killing and deporting Jews from the ghetto. Many people tried to escape through a hole cut out of the barbed wire separating the ghetto from the non-Jewish section of the city. Fishel’s father and uncle were able to make it through alive before the Germans caught on and started shooting.

Fishel, his mother, aunt and cousin did not dare go through after the shooting had started and hid in a shed. While Fishel and his mother were not discovered, the Nazis found and killed his aunt and cousin. When the quiet returned, they fled into the forest. They found many Jews hiding in the forest and learned that Fishel’s father was alive. The family was reunited and spent several months in the woods.

Late in the fall of 1942, Fishel, his parents, and an aunt and her family were taken in by a Ukrainian farmer who hid them in a hole dug out of his potato cellar. During the first year, they could go out at night to take some air. This eventually became too dangerous and they had to remain in the hole day and night. They remained hidden until liberation in the spring of 1944.

Why did they call me dirty Jew? I haven’t done anything!
Fishel Goldig

After liberation, the family returned home but they soon decided to leave. In 1946, they were smuggled into Germany and spent two years in a DP camp in Pocking.

They immigrated to Canada in 1948 and settled in Montreal. Fishel went to yeshiva, a Jewish high school. Later on, he took university courses in literature, philosophy and music. He however pursued a career in business. As a hobby, he performs in a Yiddish theater and occasionally sings in synagogue as a cantor. Fishel has four children and seven grandchildren.

Fishel has been a volunteer Speaker at the Montreal Holocaust Museum since 2015.

Download the Refugee Boulevard : Making Montreal Home after the Holocaust audio tour and follow in the footsteps of Fishel and other Holocaust survivors.