A Gift for a 20-Year-Old's Birthday 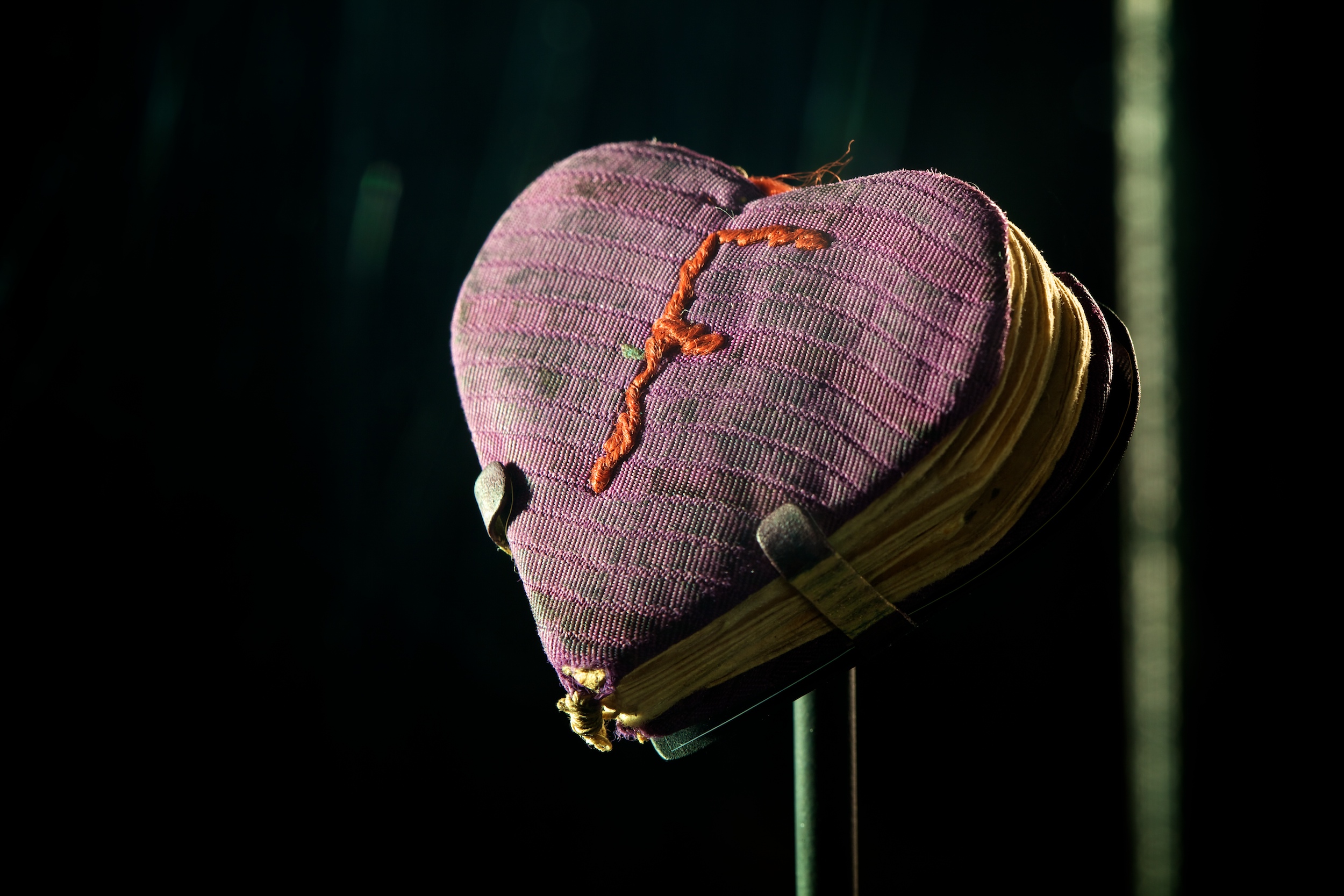 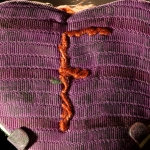 This heart-shaped booklet is a birthday card. Its cover is made of purple fabric with an “F” embroidered in orange thread, and the sheets were glued together using a mix of bread and water. The booklet’s eight pages are filled with birthday wishes addressed to Fania. She received it on her 20th birthday, December 12, 1944, in Auschwitz. 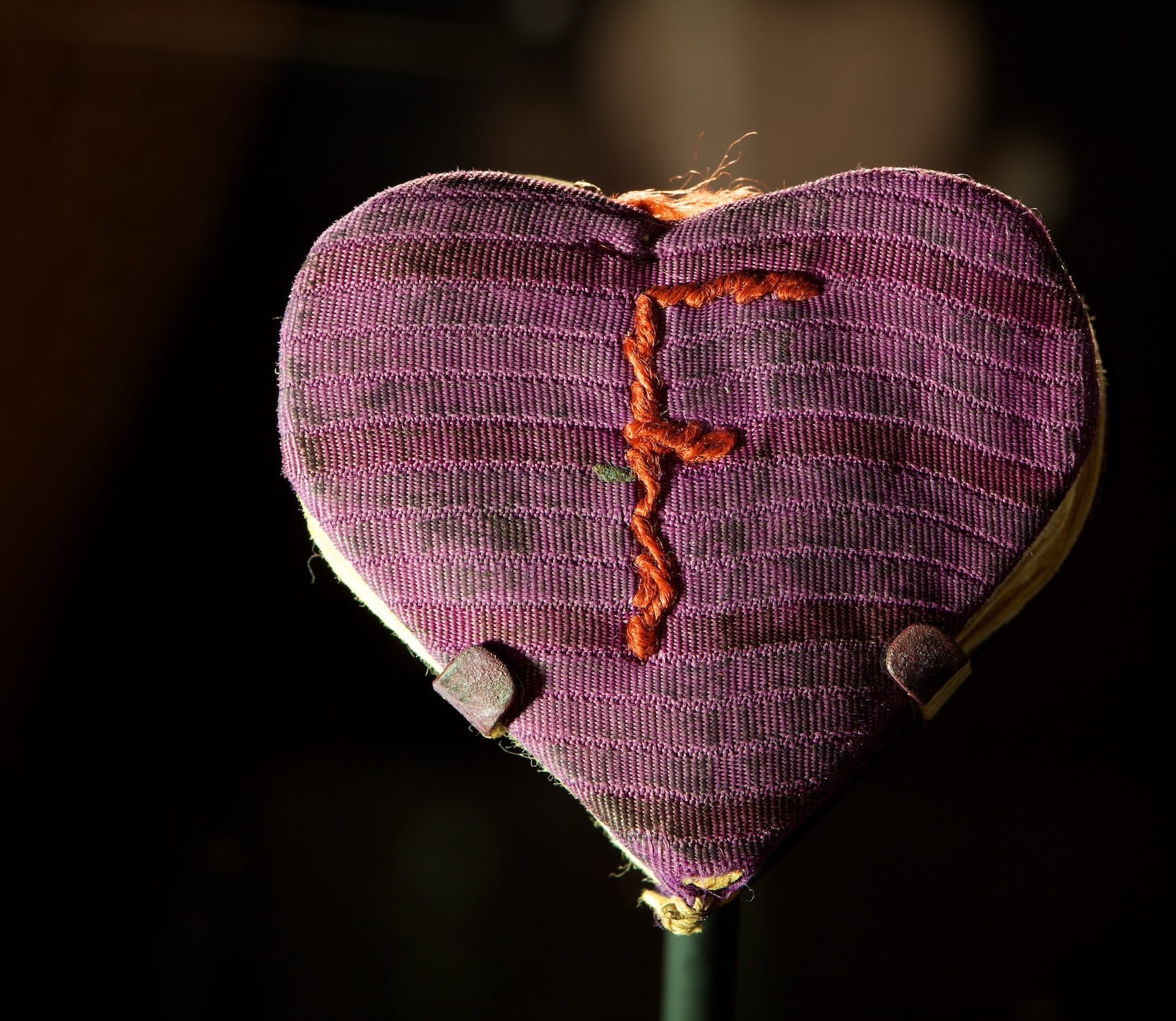 This heart-shaped booklet is a birthday card given to Fania Fainer on December 12, 1944, when she turned 20-years-old in Auschwitz. Photo: Vadim Daniel 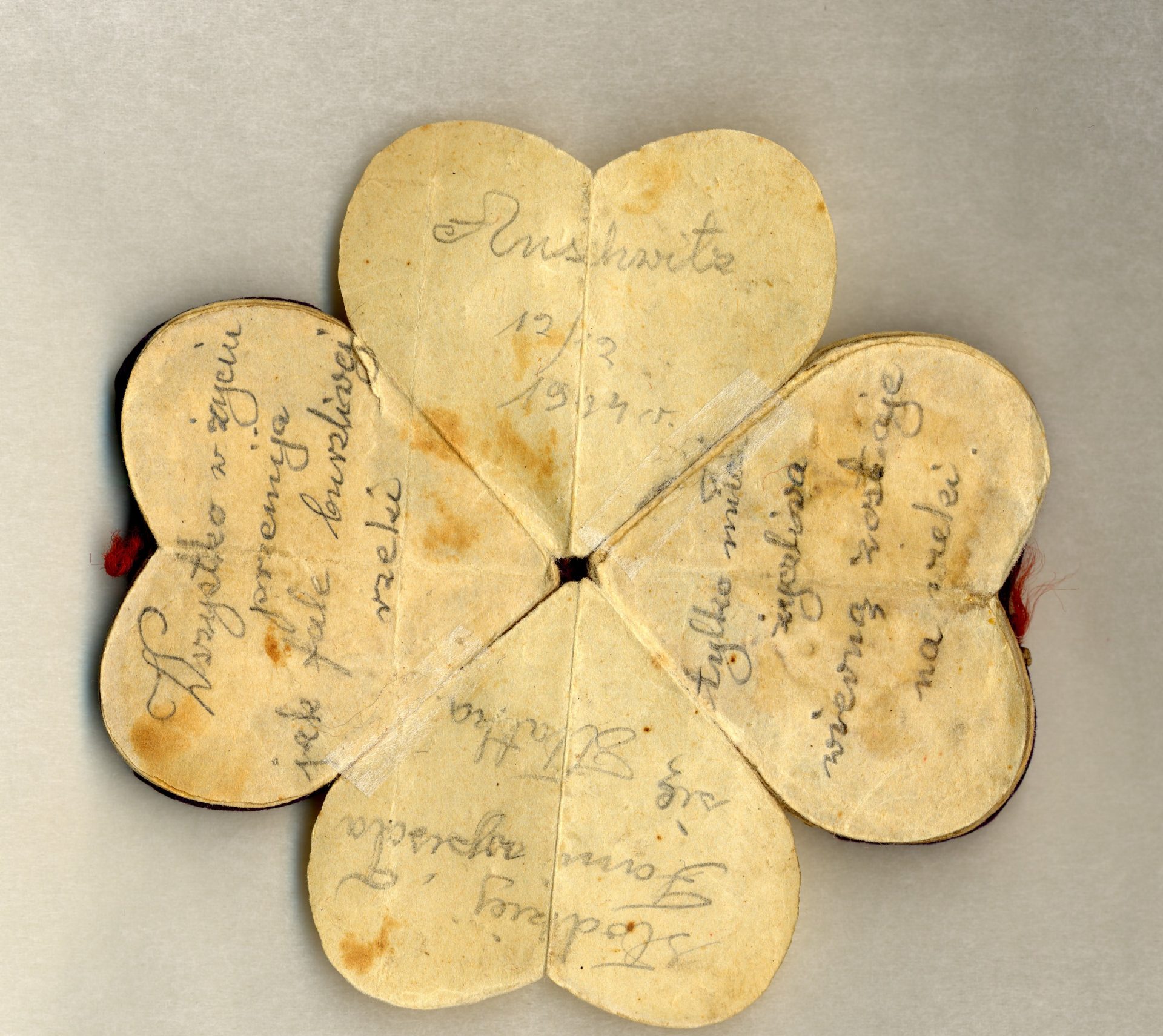 "Everything in life passes by. Like a wave over a rushing river. Only true love stays faithful forever. Love Fani, Written by Zlatka, Auschwitz, 12/X11/1944". 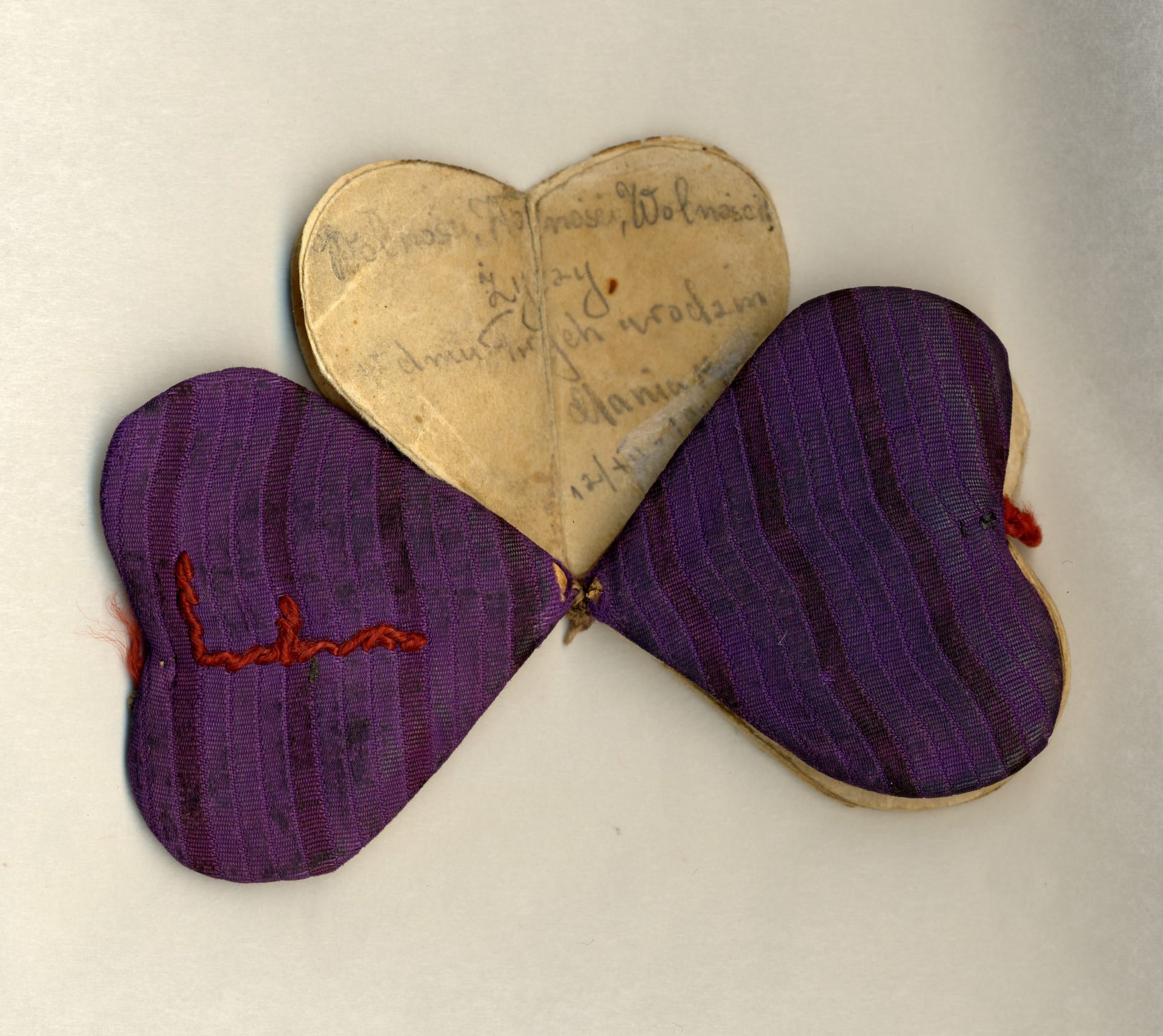 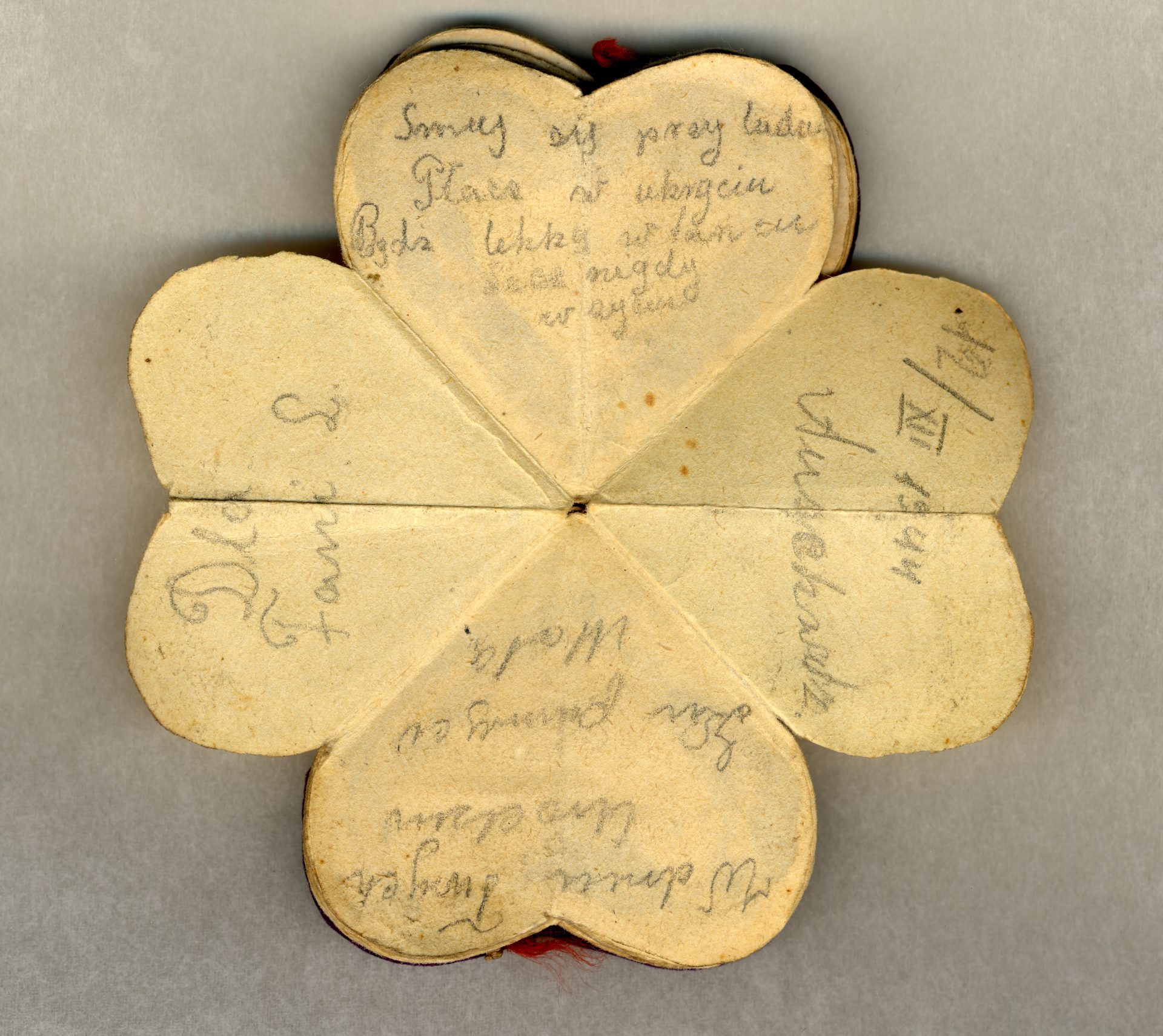 "For Fani L. Laugh among the people, Cry in hinding, Be light in dance, But never in life. In the day of your birthday, To remember" Written by Mala in the Heart of Auschwitz, 12/XII/1944. 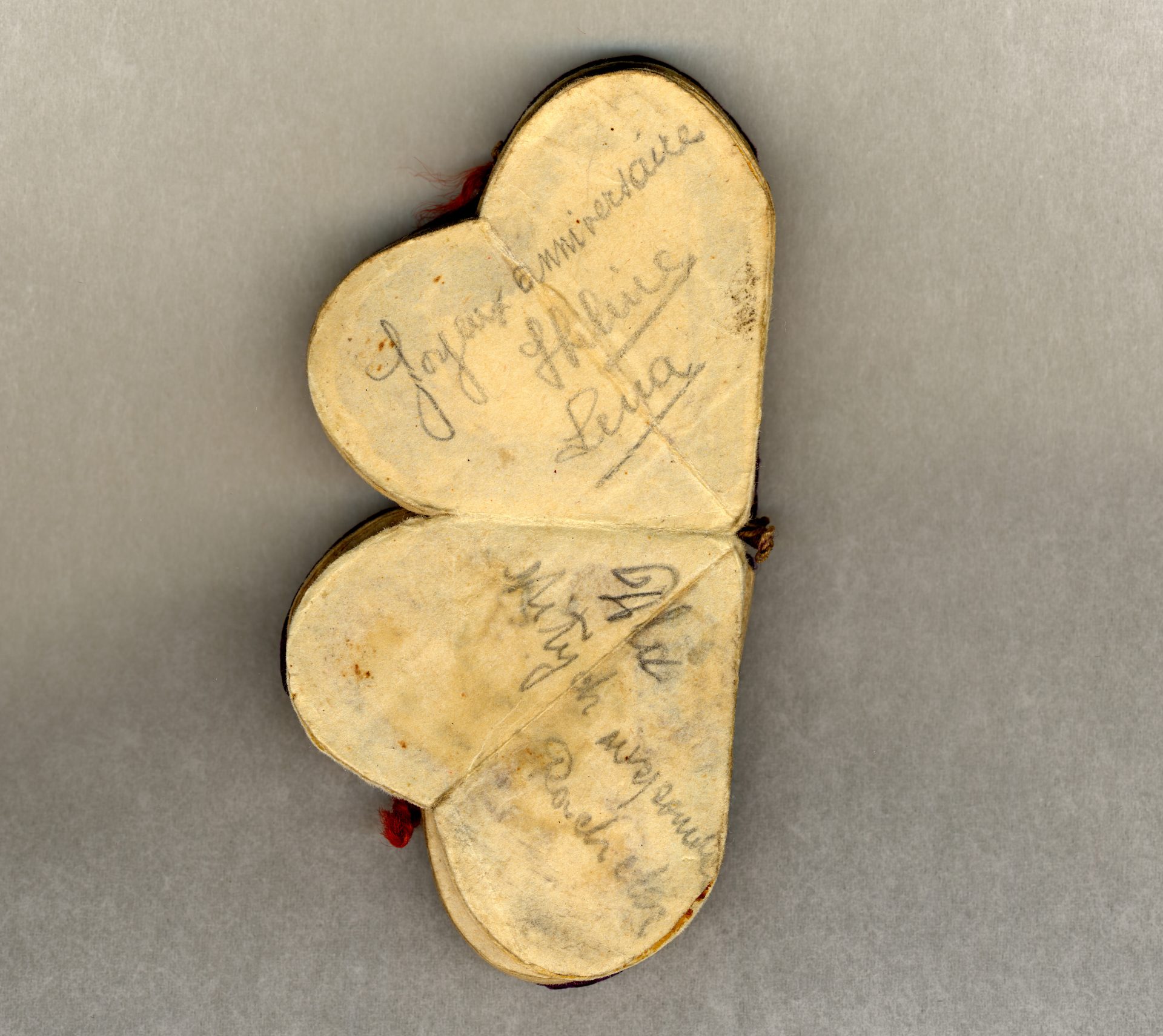 Crafting the Heart of Auschwitz

This booklet was made by Zlatka Pitluk (nee Snajderhauz) with materials found in the camp. She passed it on to eighteen other women imprisoned in Auschwitz: Hanka, Mania, Mazal, Hanka W., Berta, Fela, Mala, Ruth, Helene (Lena), Rachela, Eva Pany, Bronia, Cesia, Irena, Mina, Tonia, Gusia (Guta), et Giza. They wrote wishes and messages of hope in Polish, Hebrew, German and French. This was an act of resistance, for which the women would have faced beating or death.

Fania Fainer Arrested and Deported to Stutthof and Auschwitz-Birkenau

Fania Fainer (née Landau) lived in Bialystok, Poland, before the war. One day, while she was walking on the street without her yellow star badge, a boy pointed at her and yelled ‘’Jew!’’. Fania was encircled by a crowd and arrested by German soldiers.

Fania never saw her family again. She was first sent to the Stutthof forced labour camp near the German border. Later, in 1943, she was deported to Auschwitz-Birkenau to work in the Union Werke munitions factory. Fania received the heart-shaped booklet there.

Forced on a Death March

In January 1945, the Soviet army was advancing towards Auschwitz and the camp was evacuated. Fania and her fellow inmates were forced on a death march to Germany. At least 15,000 prisoners died, but Fania survived the march. She kept the heart hidden under her arm the entire time. She was deported by train to the Ravensbrück women’s camp, where one last message was written in the heart on January 26, 1945.

This year, the Montreal Museum Tour produced a video (in French only) about one of our most remarkable objects, the Heart of Auschwitz, a true symbol of solidarity and hope.

From May 30 to June 30, 2021, visit a virtual cabinet of curiosities in which more than thirty Montreal museums, including the Montreal Holocaust Museum, talk about their institution and present their most cherished artifacts. Visit the Montreal Museums website to discover all the objects presented by the participating museums!

A Testament to Solidarity Donated to the Museum

Fania Fainer now lives in Toronto. She donated the Heart of Auschwitz to the Montreal Holocaust Museum in 1988. This object is a testament to the solidarity between these women and a powerful symbol of moral resistance during the Holocaust.

Nicole Allio, a volunteer Museum guide since 2012, presents The Heart from Auschwitz in this video, recorded as part of the “Objects of Memory”project.