A Memento from Escaping to the USSR 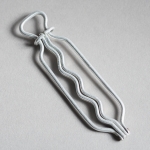 This metal curler creates waves when it is heated. It belonged to Etta Plotek who brought it in her purse during her escape to the USSR.

Escaping to the USSR

Metal curler that belonged to Etta Plotek who brought it in her purse during her escape to the USSR. (Photo: Peter Berra)

Etta Plotek’s Escape to the USSR

Etta Plotek lived in Lithuania before the war. The Nazi army invaded part of the country in 1939, despite having signed a non-aggression pact a couple of months beforehand. The Soviet Union followed in 1940 and invaded eastern Lithuania. Fearing Nazi persecution against Lithuanian Jews, Etta fled to the Soviet Union in 1941. She brought her purse with her, but had to sell it in order to buy bread. She managed to keep this hair curler as a memory of her past life.

Etta Plotek immigrated to Montreal and donated her hair curler to the Montreal Holocaust Museum in 1991.