A Jewish Family Arrival in Shanghai 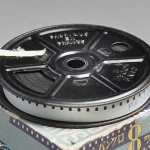 This 8mm film was recorded by the Voticky family on the ship SS Conte Rosso. They filmed scenes from their time on the ship as well as their arrival in Shanghai harbour. Anka and Arnold Voticky and their two children, Milan and Vera, arrived on May 10, 1940.

Beginning in 1932, the SS Conte Rosso route went from Trieste, Italy, to Bombay and Shanghai. During the war, Jewish families attempted to escape Nazi-occupied Europe. Facing the closed doors of most Western countries, many of them immigrated to Shanghai where no charge was required for a visa. The SS Conte Rosso became one of the most popular passenger ship departing for Asia. More than 18,000 Jews escaped to Shanghai during the Holocaust.

The Voticky family immigrated to Montreal in 1948.

The Voticky Family Arriving in Shanghai

8mm film recorded by the Voticky family on the ship SS Conte Rosso and at their arrival in Shanghai harbour. (Photo: Peter Berra)

Anka Voticky donated these films and family documents to the Montreal Holocaust Museum in 2002.