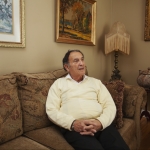 Léon Celemencki was born to Polish-Jewish parents in 1940 in Belfort, France. His father worked as a peddler and his mother was a seamstress. Léon had two older sisters.

When the German army invaded France, the family was still living in Belfort. In July 1942, Léon’s parents were summoned to the local police station. Before reporting there, his father hid the children at his accountant’s home.

Léon’s mother was deported and murdered in Auschwitz. His father managed to escape and joined the French resistance. Léon and his sisters were sent to different orphanages run by the Oeuvres de Secours aux Enfants (OSE). Learn more about Léon Celemencki’s testimony by cliking here.

Witnesses to History, Keepers of Memory

Léon is one of 30 survivors whose story is presented in the exhibition Witnesses to History, Keepers of Memory. The travelling version of this exhibition is on display at the Rivière-des-Prairies Library until January 30, 2022.