Buy your ticket for the screening
#HolocaustMuseumMTL 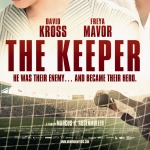 Join us for the virtual screening of the movie “The Keeper”. The film will be introduced by Rabbi Reuben Poupko,  co-Chair CIJA Quebec, Chair Canadian Rabbinic Caucus and the Rabbi of Beth Israel Beth Aaron congregation. This event is brought to you by Dolores and Harry Rosen Fund of the Jewish Public Library in collaboration with the Consulate General of the Federal Republic of Germany, the Goethe Institute of Montreal and the Montreal Holocaust Museum.

Starring David Kross, Freya Mavor and John Henshaw, “The Keeper” tells the true story of Bert Trautmann. A German soldier and prisoner of war is awarded the position of goalkeeper for Manchester City amidst post-war British protests and prejudice. His nomination causes indignation, but Bert receives the support of Rabbi Alexander Altmann and the love of Margaret Frair. However, fate will soon come between Bert and Margaret when their love and loyalty are tested.

Buy your ticket for the screening