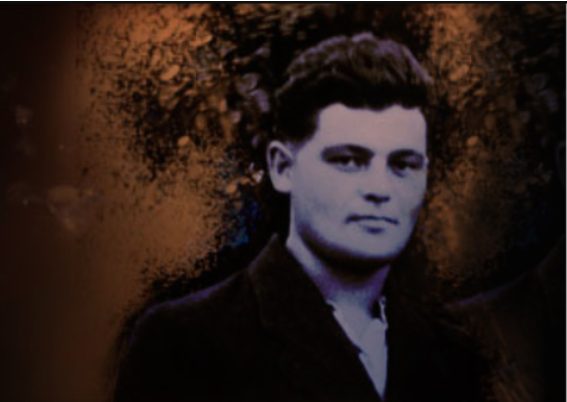 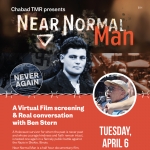 Join us on April 6th for the virtual screening of the movie Near Normal Man, followed by a conversation with the man that inspired the film, Ben Stern. In collaboration with Chabad of the Town, Montreal.

Near Normal Man is a half-hour documentary film, told in a first-hand account by Ben Stern, a Polish Jew, who survives 2 ghettos, 9 concentration camps and 2 death marches. The Nazis identify him as one of the dangerous Jews of the Warsaw Ghetto.

He emerges alive, only to face the Nazis again – 30 years later, this time in Skokie, Illinois. Ben decides he will not let them march in his adopted hometown and confronts his rabbi who tells the survivors to “stay home, close the shades and let them pass.” Leading with a small group of survivors, Ben wages a fiercely public battle against the Nazis, ACLU and Chicago Jewish leadership. He sends out petitions to cities across American and gets 750,000 signatures opposing the Nazi march. He received death threats for almost a year at night. Ben goes out, buys a gun and is ready to use it.

When the Illinois Supreme Court upholds their right to march, he prepares for the worse. Right before the March date, the Nazis learn that 60,000 Jews and Christians plan to show up to the march and counter-demonstrate, the mayor of Skokie tells the Nazis he can’t guarantee their safety even with the Illinois National Guard and police from neighboring states. The Nazis cancel the march and never return to Skokie. (source: nearnormalman.org)

Born in Warsaw, Poland, September 21, 1921, Ben grew up in Warsaw and Mogielnice, a small town outside of Warsaw. Raised by religious parents, he was part of a large family of children. After attending the Piaseczno Yeshiva in Warsaw (Jewish High School) for a year, he began to work, helping out the family in the general store owned by his grandmother in Mogielnice. For over five decades Ben has spoken to hundreds of audiences, of all ages, across America. His life story is featured in the U.S. Holocaust Memorial Museum. He and Helen now live in Berkeley, California. They have three grown children, seven grandchildren and four great-grandchildren.

This documentary film was conceived in 2011, as Ben led a group of 29 high school students through Poland. As lead educator, Ben traveled and stood with them on the sites of significant personal and historical events. He brought history to life through his unforgettable journey and by his insistence on both surviving and remaining human through it all — a story that continues to inspire all who traveled with him. (source: nearnormalman.org)

Register for the movie screening here