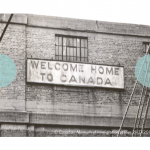 Join us at the vernissage of the new virtual exhibit Building New Lives, made possible with the support of the Virtual Exhibits Investment Program, Virtual Museum of Canada.

After the Holocaust, Canada became home to over 35,000 Jewish refugees. Learn about this unique history through a collection of video testimonies recorded by archives and Holocaust education organizations throughout the country.

Through personal accounts, itineraries, and photographs, explore key dates of immigration, before, during and after the Second World War. Learn also about the life stories and contributions of Holocaust survivors who made their homes in communities across Canada.

The History of the Holocaust

The Holocaust was the systematic persecution and murder of 6 million Jews, organized by the Nazi State and its collaborators from 1933 to 1945.

In addition to committing genocide against the Jews, the Nazis committed genocide against the Roma and the Sinti.
Other marginalized groups were also persecuted during this period: people with disabilities, homosexuals, Slavic people, political opponents, and Jehovah Witnesses. (Montreal Holocaust Museum)