Jewish Resistance in the Ghettos 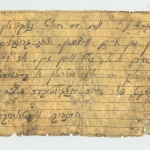 These letters reveal the secret exchanges between Charles Kotkowski and a resistance group in the Warsaw ghetto. The four letters were written by Ignac Samsonowicz, Charles’ Yiddish teacher before the war. Signed using the pseudonym of Henryk Wiktorsky, they were received between 1943 and 1944. Three letters are written in Yiddish and one is in Polish.

Resistance in the Piotrkow Ghetto 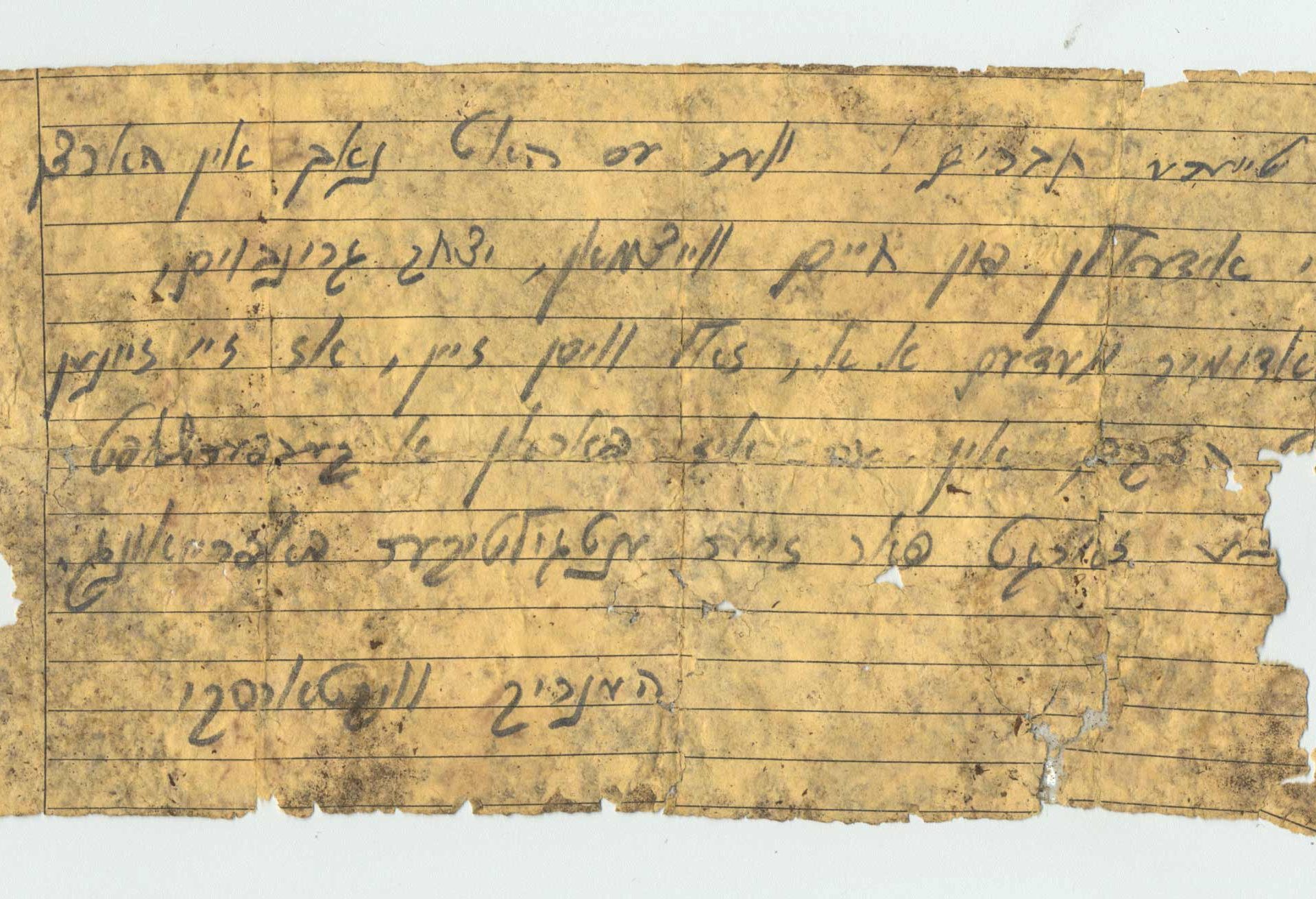 “Dear friends! Whoever still has in his heart the ideals of Chaim Weizmann, Itzhak Grinbaum and Vladimir Medem and others, should know that they are not left out in the wilderness. There is a collective body of people who care for their liberation. Henryk Wiktorsky.” 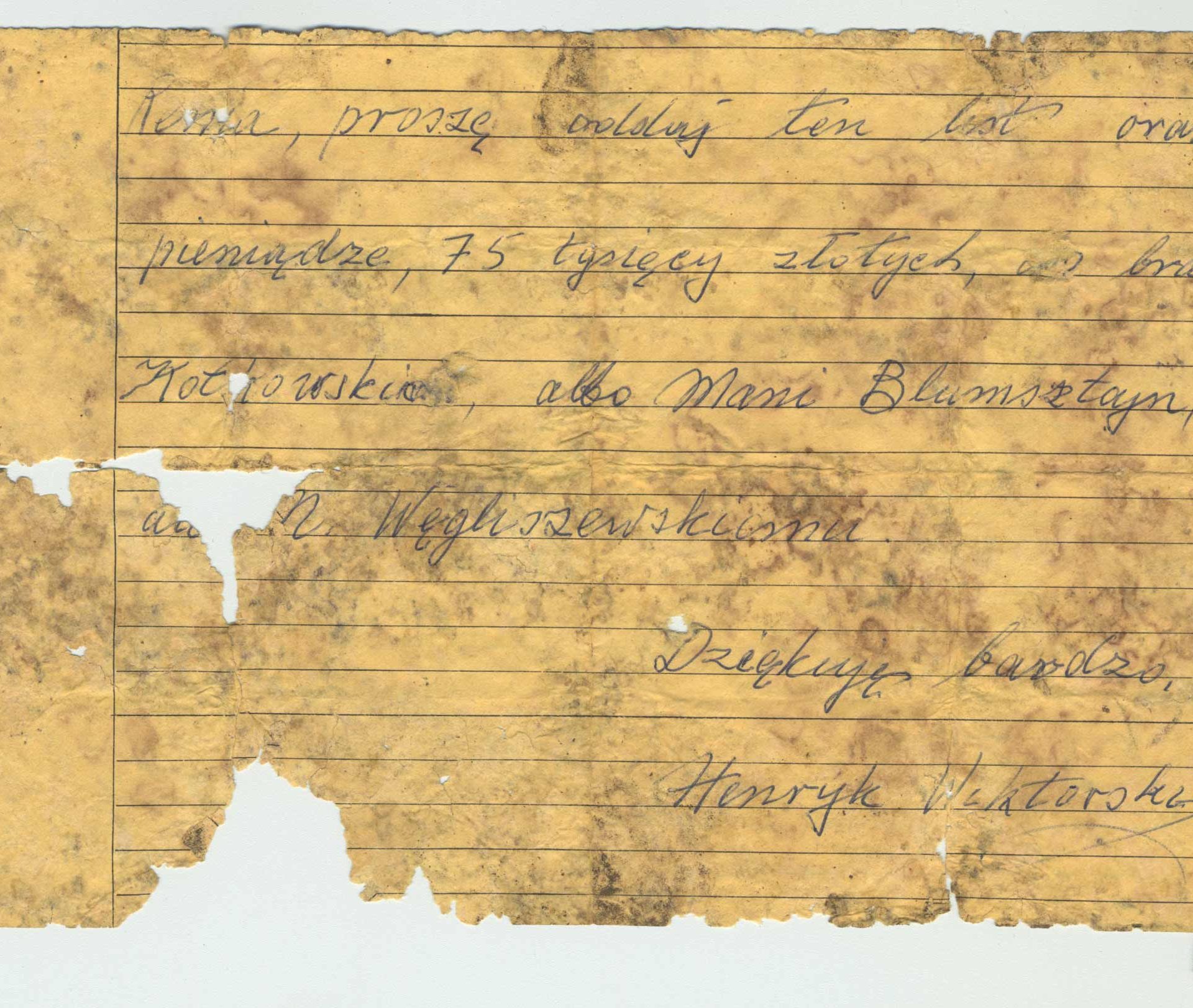 “Renia, please deliver this letter and the money, 75.000 Zlotys, to the brothers Kotkowski, or to Mani Blumenstajn, or to Nachum Wegliszewski. Henryk Wiktorski.” 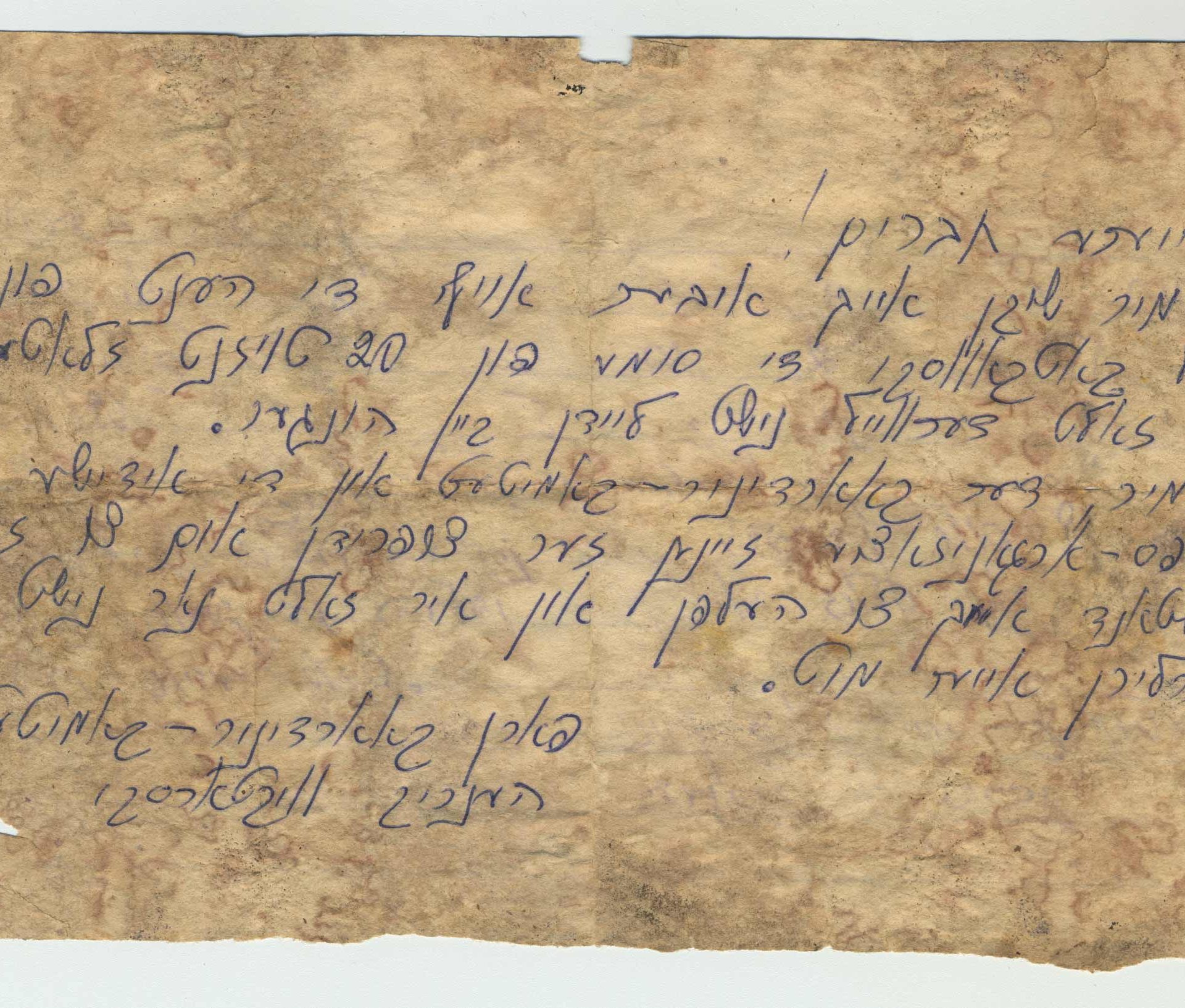 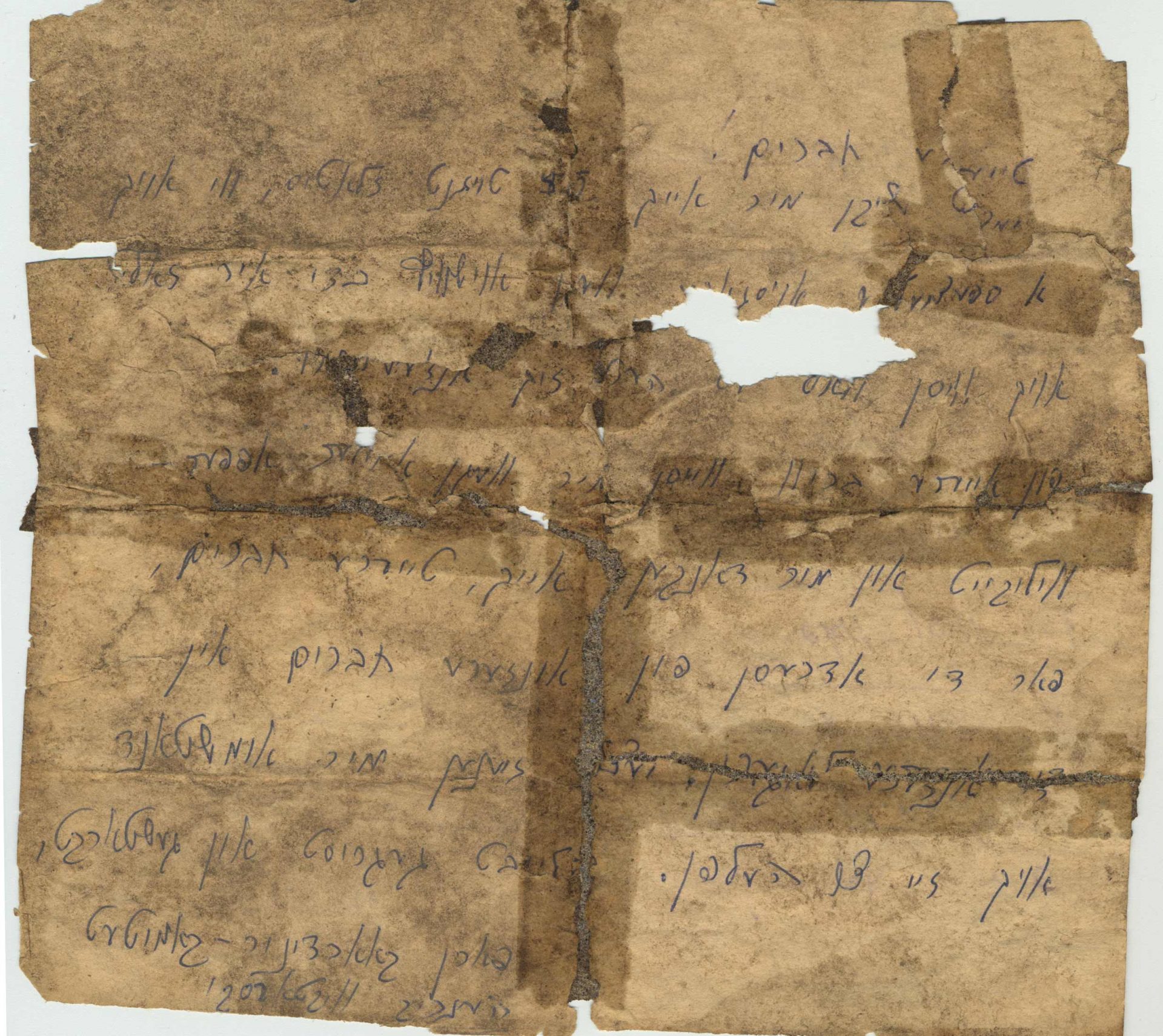 “Dear comrades, now we are sending you 50,000 zlotys and a special edition about Auschwitz, so that you too should not [... ] From your letters we have learned about your willingness to fight and we thank you dear friends for the addresses of our other comrades in the other labor camps. Now we are able to help them too. Stay well and strong. For the Coordinating Committee, Henryk Wiktorsky” 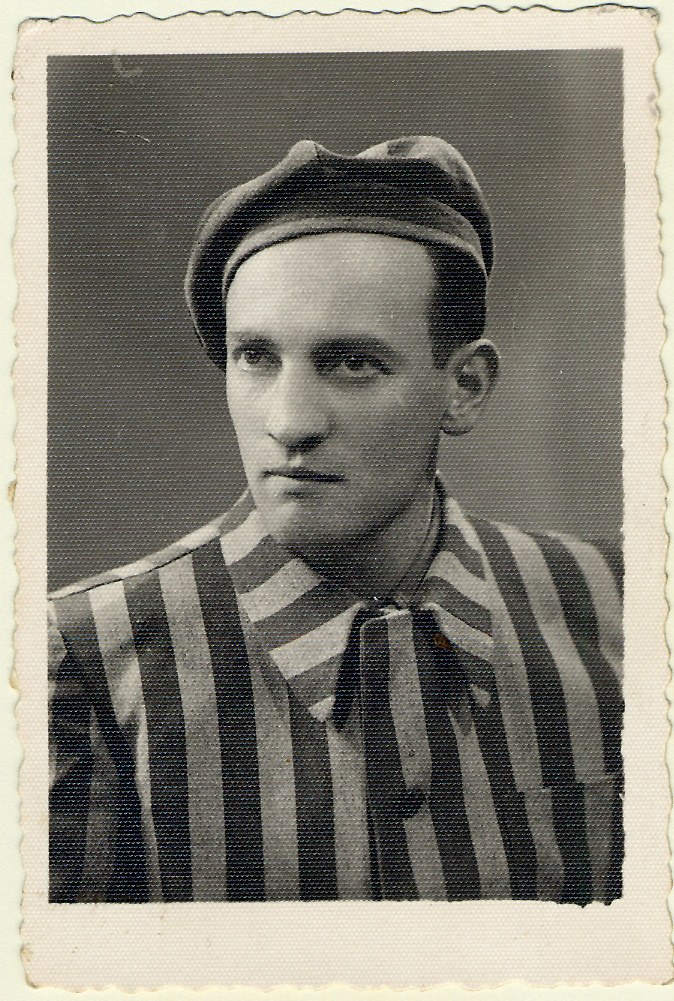 Charles Kotkowsky in his prisoner uniform after liberation from the Buchenwald camp.

Jewish Resistance in the Ghettos

Charles Kotkowsky was selected for forced labour in the Piotrkow ghetto glass factory. When the Nazis began deporting Jews to the Auschwitz and Treblinka camps, Charles received his first letters from Ignac Samsonowicz.

Charles received these letters through guards, who received them from a courier from the Warsaw ghetto. Sometimes, Charles was also given money, which he distributed to young ghetto inhabitants so they could buy food. This exchange had to be done in secret, or else Charles and others could have been killed.

Listen to Charles Kotkowsky explain how he received these letters.

A testimony of Jewish Resistance and Solidarity

After reading the letters, Charles hid them in jars buried under the ground. He believed they would one day become an important testament to Jewish solidarity during the Holocaust. Charles survived his deportation to various concentration camps and returned to Lodz after the war to recover his letters. Only four of the letters remained.

Charles Kotkowsky immigrated to Canada in 1951. He married Sally Blum and they had two children. He passed away in 2003 in Toronto.

Charles donated these letters to the Montreal Holocaust Museum in 1997. 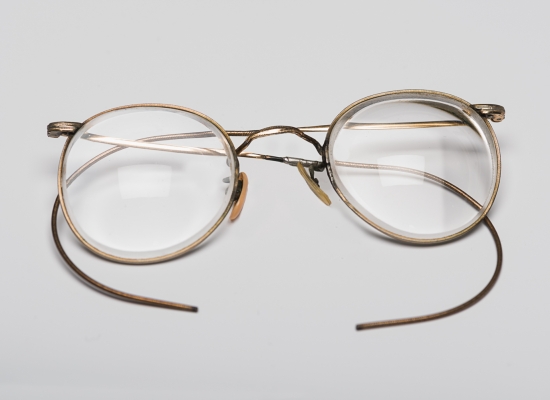