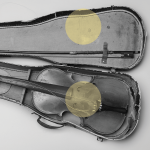 (En anglais seulement) Join us for the launch of the CD, « Remember! Gedenk! Yiddish Ghetto Songs » produced by The Dora Wasserman Yiddish Theatre of the Segal Centre for Performing Arts, and Sidney Zoltak, Shoah survivor, and Montreal Holocaust Museum volunteer. Discover the lyrics and music written about the Holocaust by those who survived, and those who did not.

The concert features 16 songs and stories from the CD performed by singers from the Dora Wasserman Yiddish Theatre. Music during the Holocaust

“When ordinary language fails, poetry and song find expression. In the songs of the Holocaust, the poets who crafted the words and the people whose voices gave life to these songs, expressed their deepest despair and their brightest dreams, their resilience and resistance, their loves and their losses. These songs were written in the midst of suffering and horror and were created and sung in the ghettos, the forests and the camps. They are a testament to the human spirit, and to enduring humanity and creativity in the maelstrom of an inhumane world.” (Segal Centre for Performing Arts)

Tickets can be purchased through the Segal Centre for Performing Arts and cost $15 or $30 including the CD.