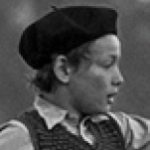 Based on the autobiographical novel for young readers by Joseph Joffo, Un Sac de Billes follows two Jewish children as they escape, on their own, from Nazi occupied France.

“A schoolboy game becomes a symbol of survival and resilience against the odds. Joseph (Dorian Le Chech) and Maurice (Batyste Fleurial) are two cheeky Jewish brothers who have nothing but a map, some money and the clothes on their back as they flee occupied France in World War 2.”