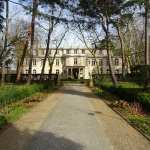 This event on the history and legacy of the January 1942 conference is organized in partnership with the Goethe Institute Montreal, the German Consulate General, German Studies Canada, and others.

Please note this event is in French.

On January 20, 1942, fifteen high ranking officials of the Third Reich met in a villa on the shores of Lake Wannsee near Berlin with the objective of putting in place the logistics necessary for the “final solution of the Jewish question” and thereby the systematic extinction of 11 million Jews in Europe. Despite the order to destroy the 30 copies of the protocol of this highly secret 90-minute meeting, only one copy was found after the end of the war. It revealed the thoughts, directions and decisions taken that day that will forever be remembered.

On the occasion of the 80th anniversary of this meeting, which would later become known as the “Wannsee Conference”, the École de langues de l’UQAM is organizing, on March 22 and 25, in collaboration with the Consulate General of Germany, the Goethe Institute Montreal and the Association of University Teachers of German in Canada, a day of conferences with the aim of arousing the interest of the guests, to inform themselves and to exchange in a true interdisciplinary approach.

Partners of the event

In order to allow as many interested parties as possible to participate in the activities, the day’s lectures will be offered in co-modal mode and will take place in the Judith Jasmin Pavilion, in the Salle des boiseries (J-2805) as well as online at Zoom.

The event is organized by Sebastian Döderlein and Britta Starcke of the UQAM Language School.

Participate in this event